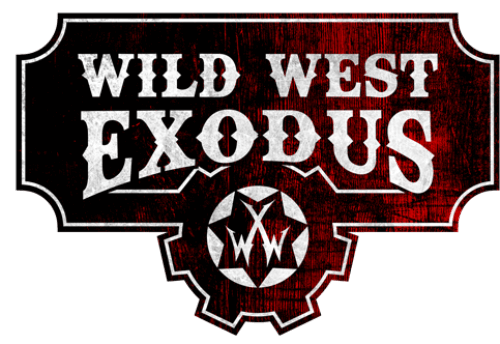 In Wild West Exodus, two players take control of blazing gunfighters, supernatural warriors, mighty machines and devious commanders and pit them against each other in a thrilling encounter across the frontier and beyond. The player who destroys all of their opponent's models or achieves their adventure objectives wins the game.

What You Need To Play 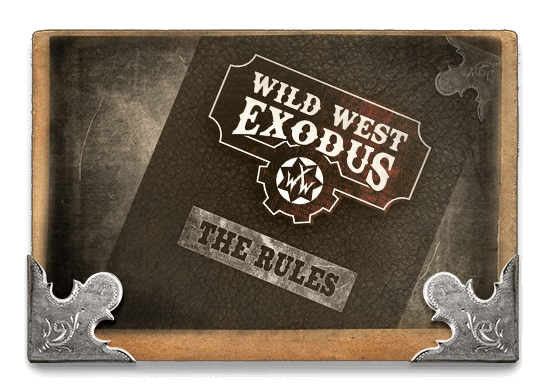 Every game needs rules and, the good news is, the Wild West Exodus rulebook is free to download!

You can download the Full Rulebook from this site to get yourself started. 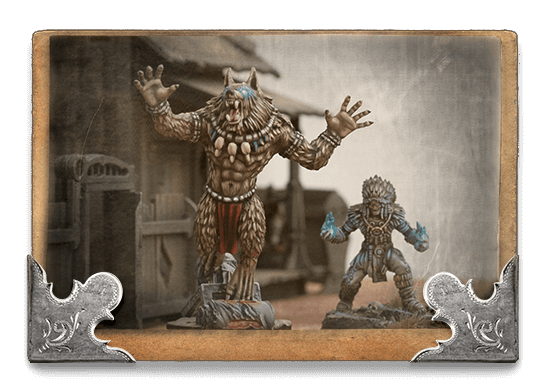 Wild West Exodus has a plethora of finely cast resin and plastic miniatures to choose from. Will you go for the daring Outlaws, twisted Hex, or the secretive Watchers? 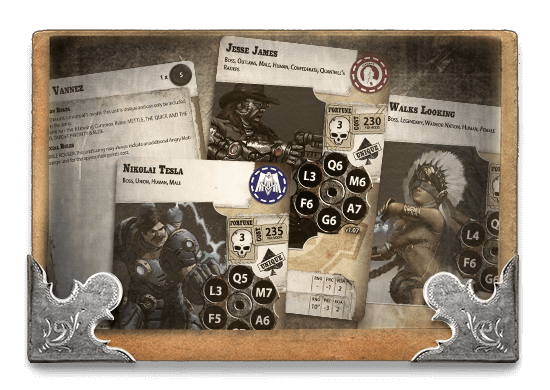 Each unit in the game has a Unit Card that tells you its profile and special rules, plus Bosses have a unique Posse card that dictates who will follow them into the fray.

All of these are free downloads, just visit the Unit Cards section. 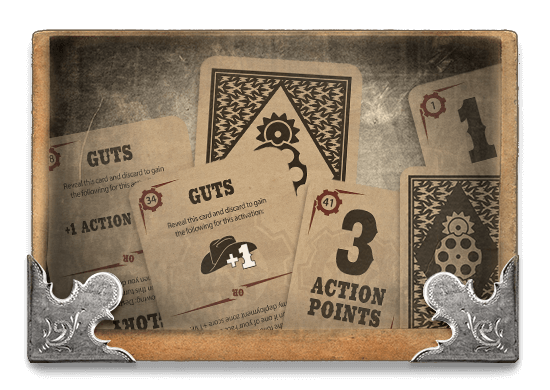 The Action deck is pivotal to the game: determining the number of action points you have to activate your units and often forcing your hand, whilst Adventure Deck gives you cards that can either be used to score additional Victory Points or to grant an in game bonus. 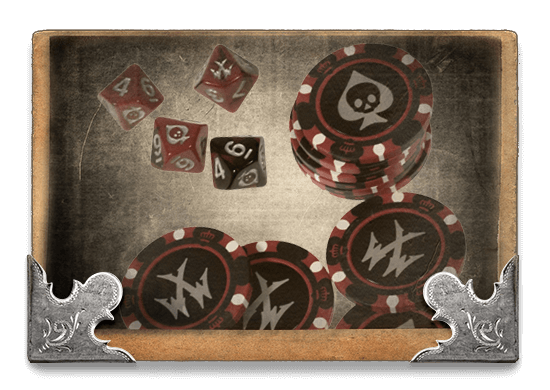 Every time you need to make a skills check against your stats you need to roll on a D10 to determine if you succeed. Don't like the result? Then spend a Fortune Chip to change your luck.

Ten Sided Dice and Fortune Chips are available for purchase at our store. 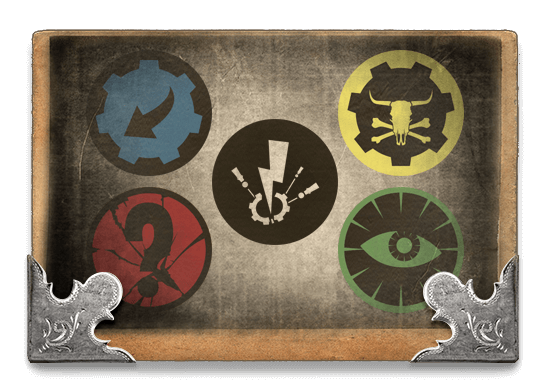 Markers help to pick out units with special conditions and keep track of them throughout the game.

If you want to print your own you can find them on the resources page. 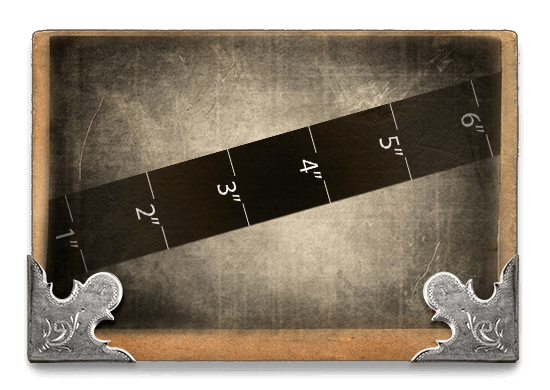 Every unit has a Quick (or Q) value, this determines how far you can move across the table in inches.

You will need a measuring device, tape measures work best but there is also a handy ruler included in the Starter Sets and Gubbins Set. 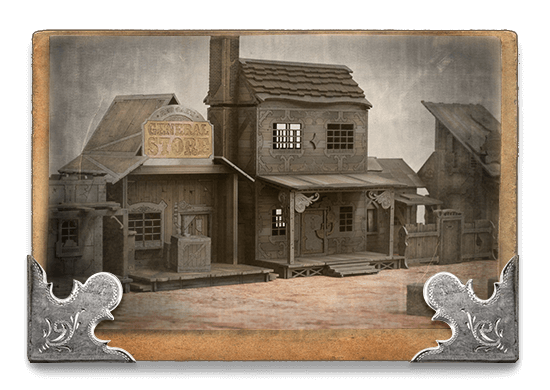 Wild West Exodus can be played on a 2ft x 2ft table right up to a 6ft x 4ft table and beyond for those really epic showdowns.

In order to have an awesome gaming experience, we recommend a healthy dose of scatter terrain to hide behind. Terrain and Scenery are available to purchase online at our store. 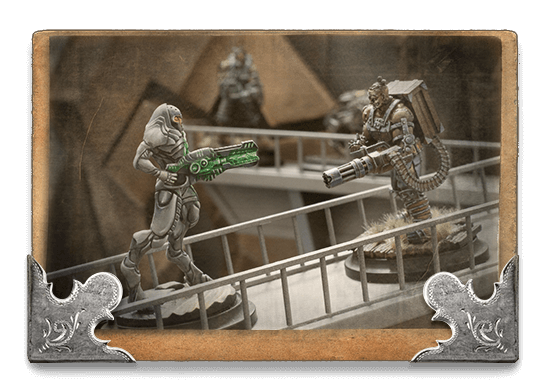 Everyone needs a good opponent to test their mettle against. Check out our Store Locator to find your nearest Friendly Local Gaming Store, and book a game! 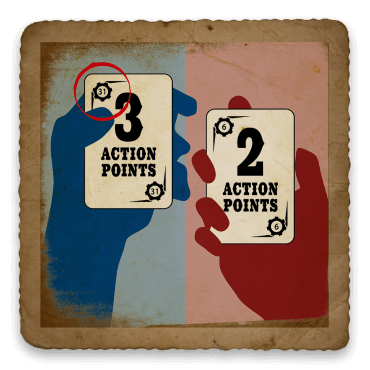 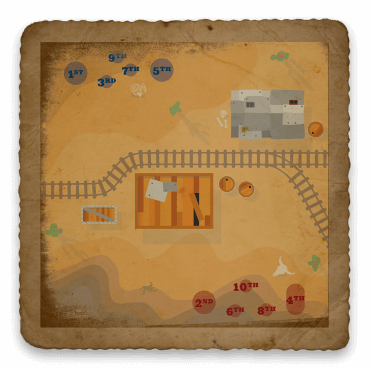 2. Player with Initiative deploys 1 unit first, then alternate until all units have been placed 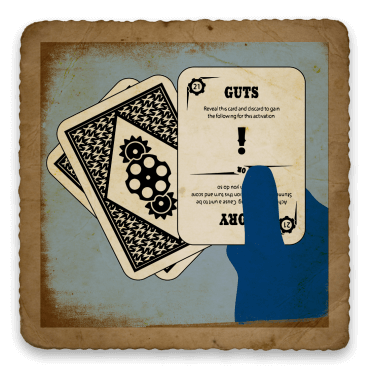 3. Both players draw Adventure Cards, these show how you gain victory points! 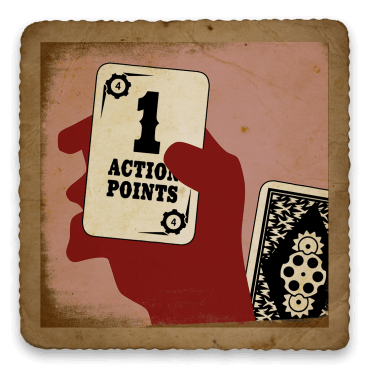 4. Draw from the Action Card deck to get your Action Points for the Activation 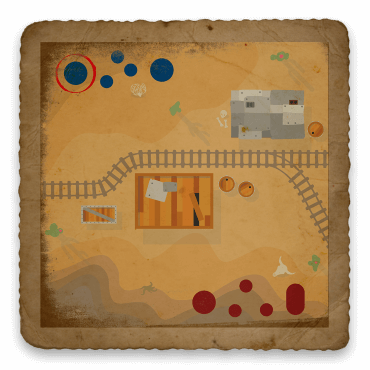 5. Player with Initiative decides what unit to Activate 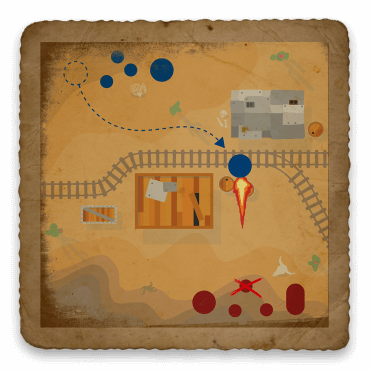 6. The units spend action points to perform Actions up to their Limit 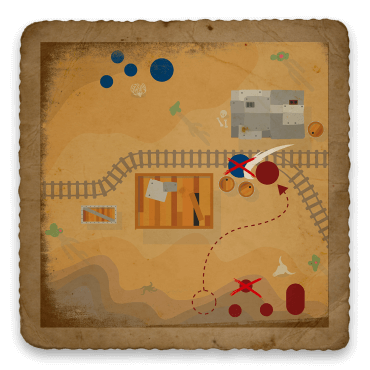 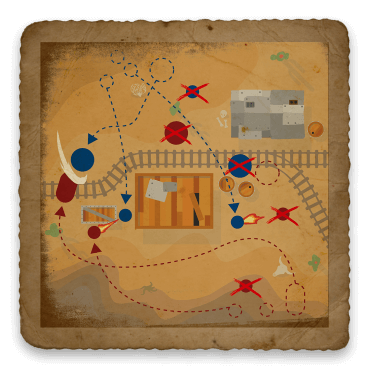 8. Activation alternates until all units have activated 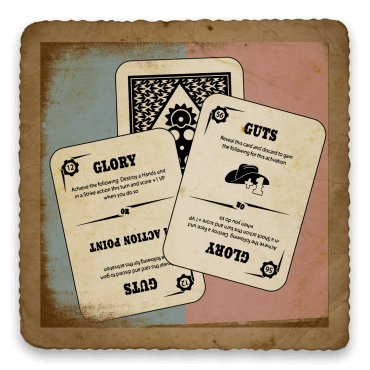 Now it's time to choose a faction!

The architects of the Dystopian Age, the Covenant of the Enlightened wield their formidable intellects to sweep aside those who stand in the way of Science and Progress. These masters of technology covet knowledge above all things and believe that it is only they who can steer humanity on a path to enlightenment.

Whether with monstrous fusions of man and machine or with their terrifying and wonderous war-engines, the Covenant of the Enlightened take every opportunity to demonstrate their technological supremacy. The discoveries that were intended to herald a new era for humanity are instead used to punish those who would misuse them. Only when the Covenant are lauded as the rightful leaders of the Earth this new Dystopian Age can the world be brought into a new dawn of achievement and prosperity. 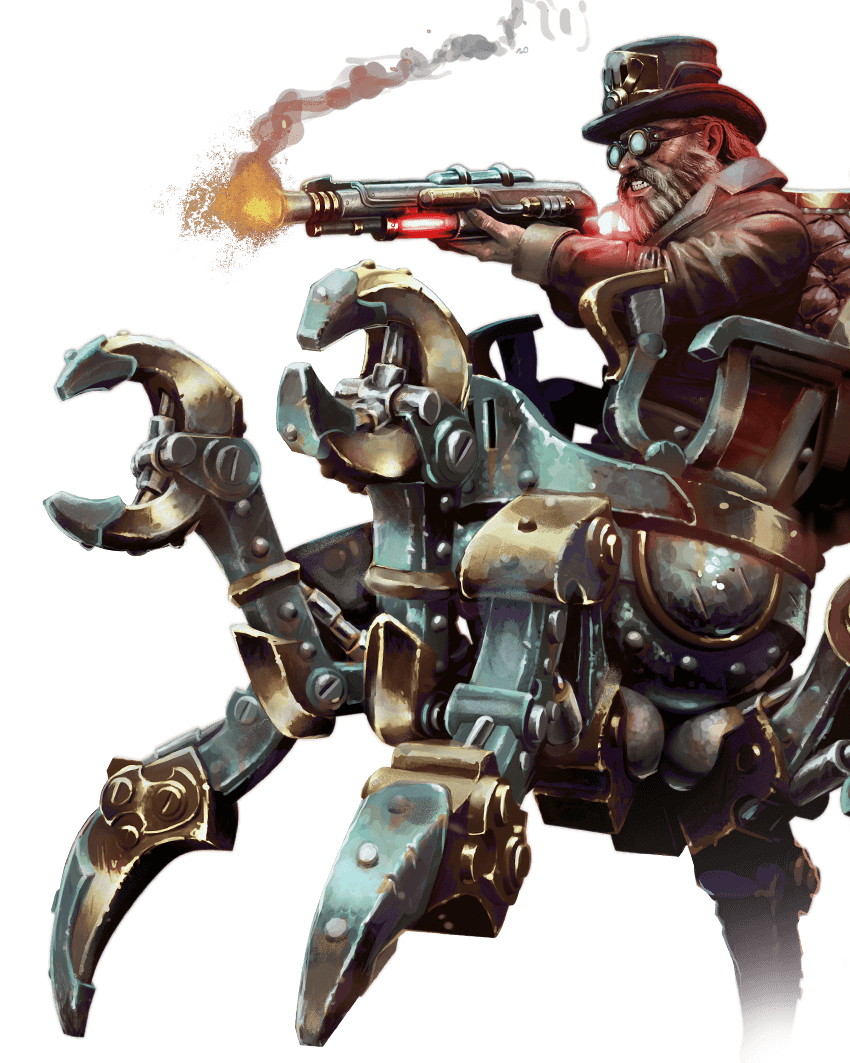 The Hex just wants to be left alone. Hunted across the galaxy, the Hex has come to Earth to find a new home for itself. It calls out to those similarly abused and victimised so that it might find companionship and learn from their culture and endeavours.

The Hex has no sense of right and wrong, it only knows survival and the loneliness that eons of persecution have brought about. On Earth it has made new allies and bonded with many who are similarly persecuted, but the Hex's gift of power is misused by humanity. Those who were the victim now have the strength to strike back at those who made them suffer. Led by a Dark Council the Hex manipulate and inveigle themselves in the great nations of the world, for only through control can they truly be safe. 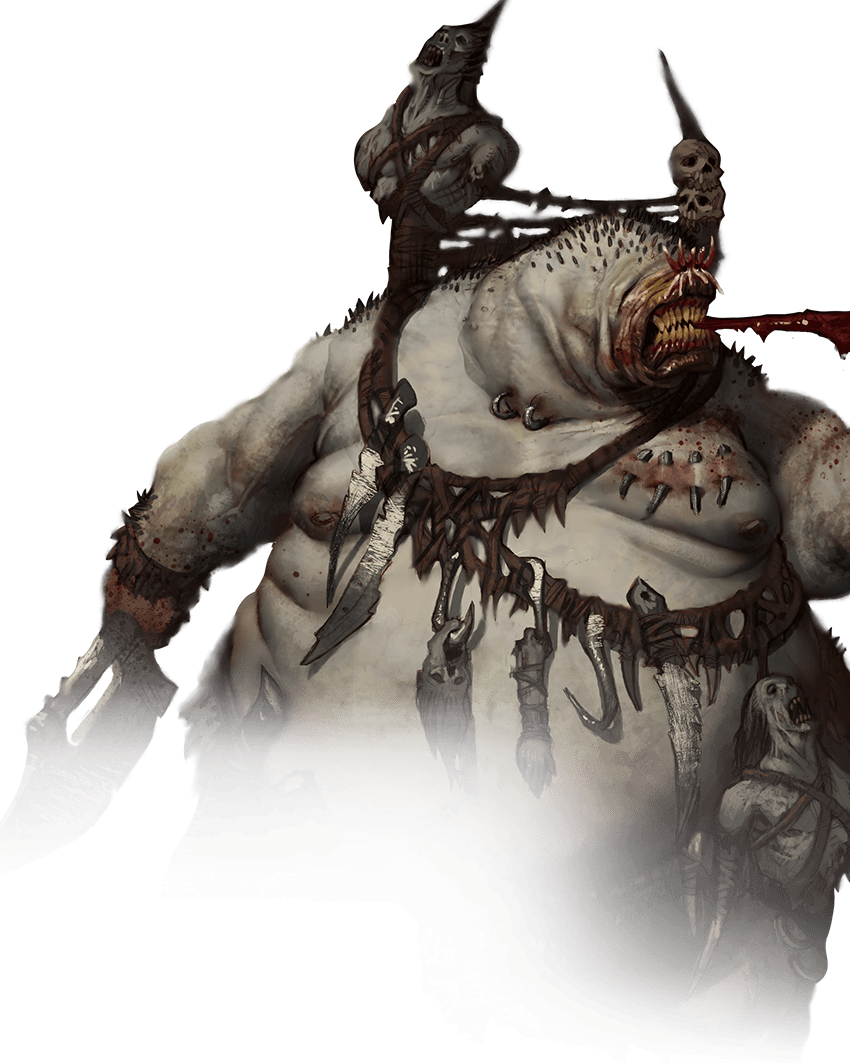 The law is an elusive animal on the Union Frontier. After the brutal culmination of the civil war known as the Ore War, the western territories have entered the Dystopian Age, a time of such violence and upheaval that there is almost no hope for ordinary men and women to survive, let alone prosper.

First amongst those who rise up to defend them are the Lawmen of the Federated States Marshal Service. These determined and resourceful individuals stand for the Law and act as judge, jury and, if necessary, executioners of those who would sow misery and mayhem. 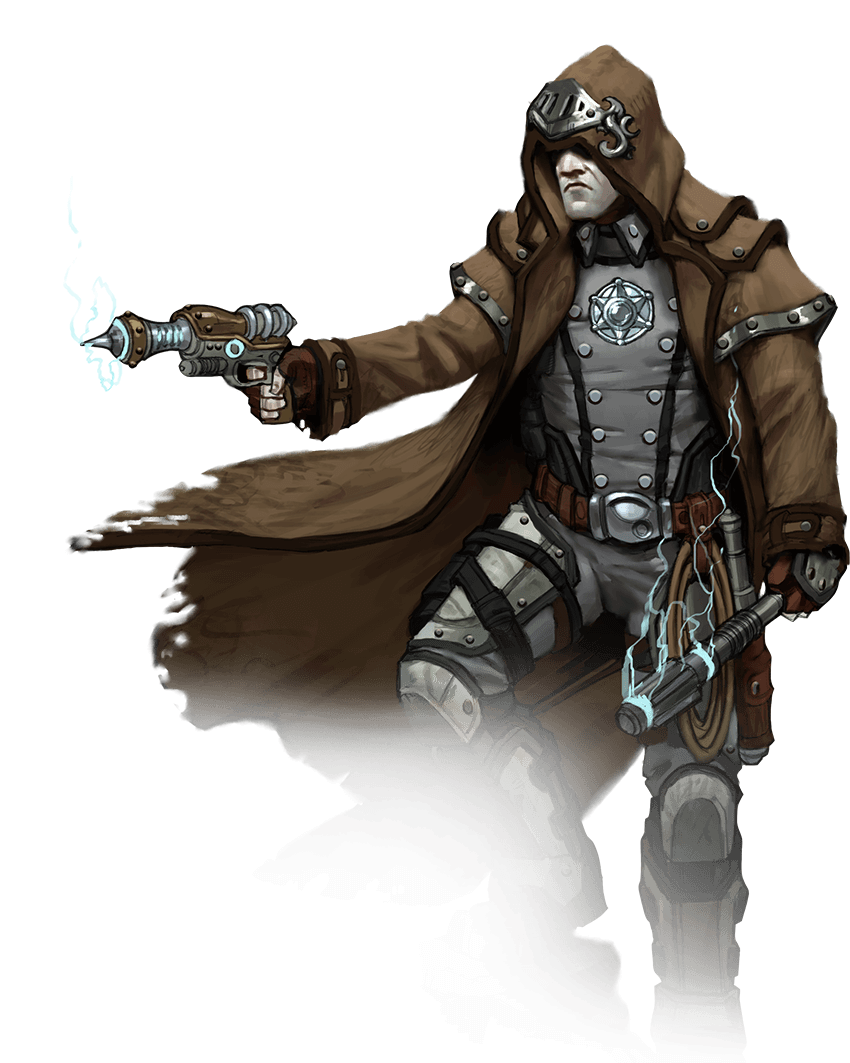 Existing in a formless realm of energy beyond mortal comprehension, the Order has been waging a ceaseless crusade against the malign influence of the Hex. On Earth, their followers believe in the righteousness of this cause but their true understanding of the powers they serve is shrouded in mystery and doctrine.

For the men and women of the Order, they know that their crusade is just and that the very fate of humanity rests with them. With such a burden, the Order strive to put themselves above their human frailties and morality. The Order knows that should their crusade here on Earth fail; the world will burn. 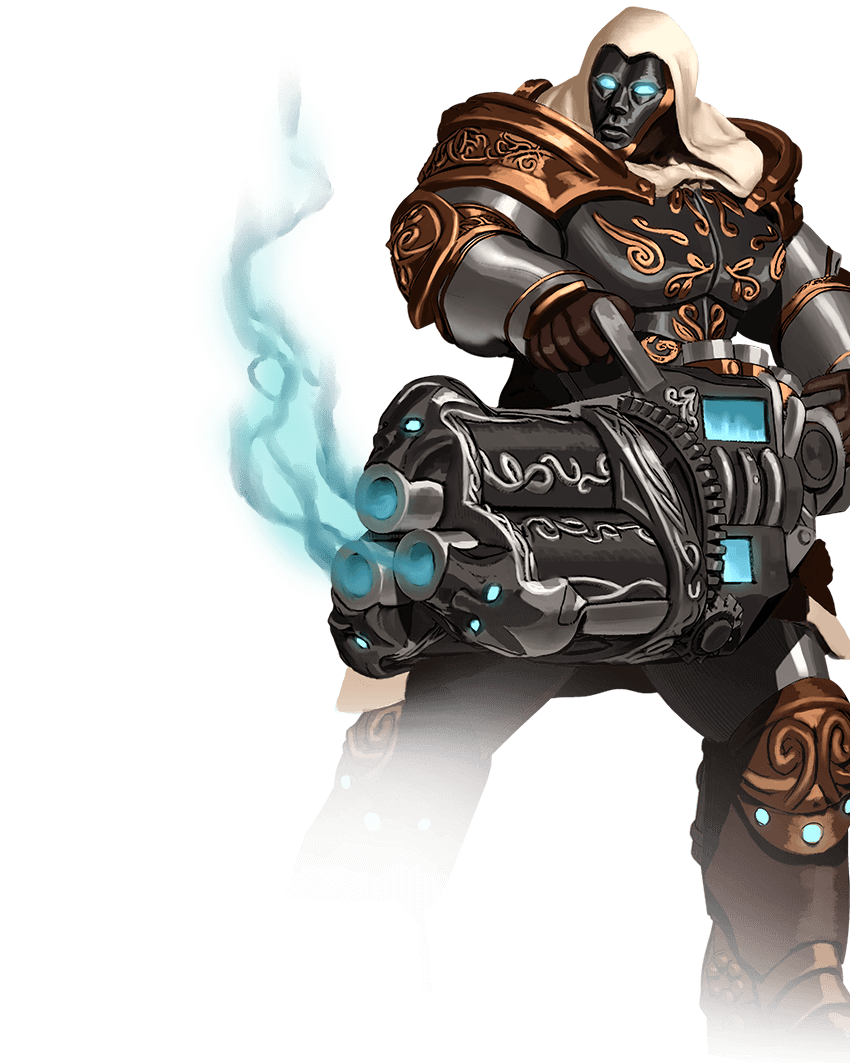 The Outlaws are a rag-tag mix of men and women. Each forging their own path in the world, each fiercely independent. To the Union and Lawmen, they are viewed as desperate and dangerous criminals. The term outlaw is as a slur among the men and women of the Union. In these troubled times, where war and wages thrive, cut-throats, bandits and mercenaries inevitably follow.

Separately, the Outlaws flock to charismatic men and women who offer them, fame, fortune or a glorious destiny. The Dystopian Age makes such individuals into outlaw nobility, their services for hire as displays of power to intimidate others. Outlaws can turn a rich man into a dangerous one. Of course, it goes without saying that any relationship based solely on coin can quickly turn predatory if an employer fails to keep his mercenaries well paid.

Though the Outlaws are a varied bunch, they largely fall under one of four Affiliations. You are free to choose Bosses or Commanders from any of them. 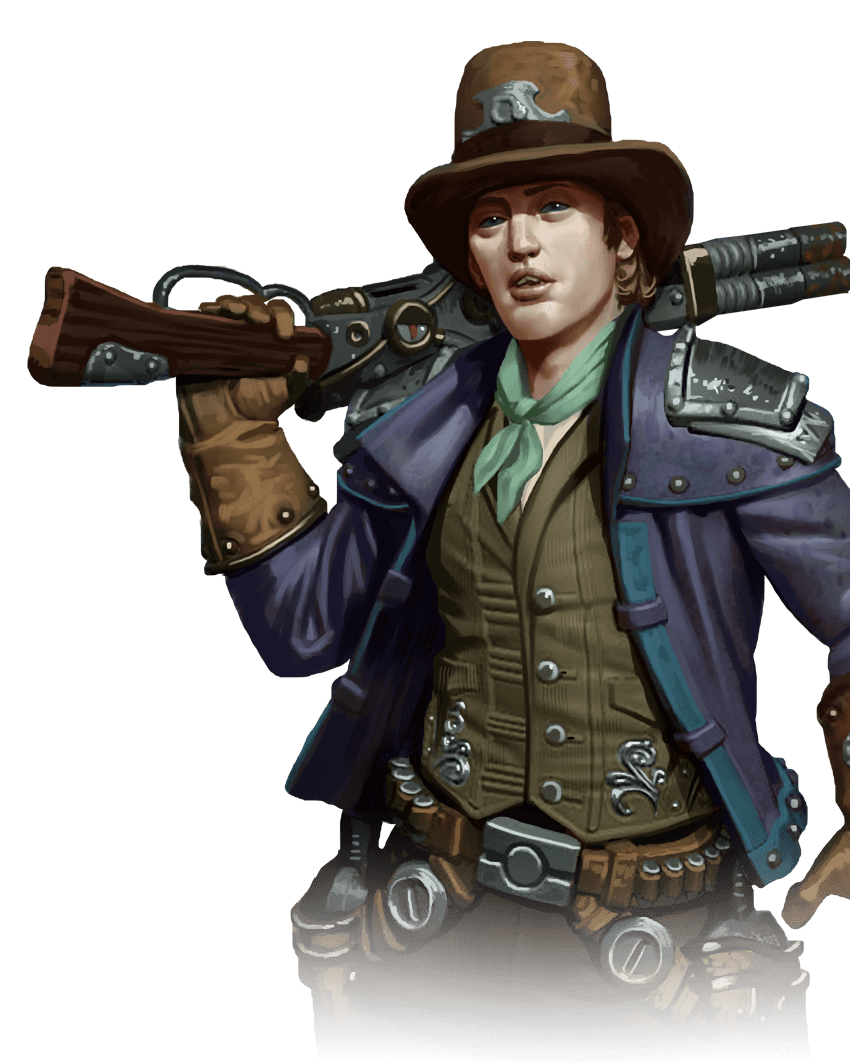 Tarnished by a recent Civil War and brutalised by the horrific technologies it unleashed to claim victory, the Union is a dark reflection of its former glory. The conquest and subjugation of the former Confederacy and the deeper south, as well as the new opportunities opening in the West stand as grim consolation for the Union’s war-wearied soul.

The Union cheer the formidable military might their country now wields to ensure that never again will anyone have to pay the brutal price that freedom demands. Nothing, however, can truly extinguish the fire of the American spirit. Scarred and brutalised by their own experiences, the Union’s military-industrial complex is well-aware of the depths to which man can fall – the only hope is to be found in having strength and resolution to stand tall in the face of great adversity, whatever the cost. 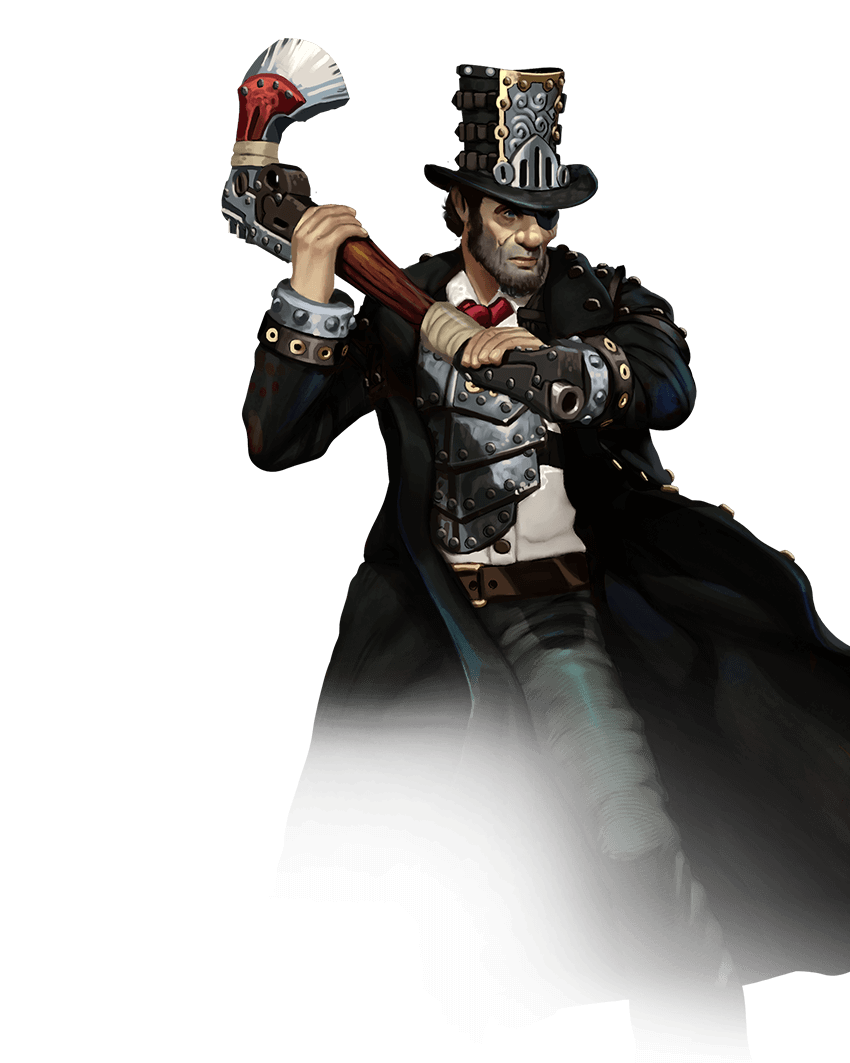 Preferring to live out their lives alongside nature, the Warrior Nation dwell in concord with the rhythms of the Earth, attuned to the seasons and the weave of life and death that binds all living things together. Able to wield a form of spirit energy, they are the defenders of the natural world, guardians of all things spiritual. Recent years have seen mounting aggression against the Warrior Nation in North America by the Union and their settlers.

With growing threats and omens of darker times to come, the Warrior Nation understand that this must be the greatest cause in which they fight, for no land endures long if it cannot take up arms against those that wish it harm. Standing unified against their enemies the Warrior Nation are humanity’s greatest hope, whether the rest of the world realises it or not… 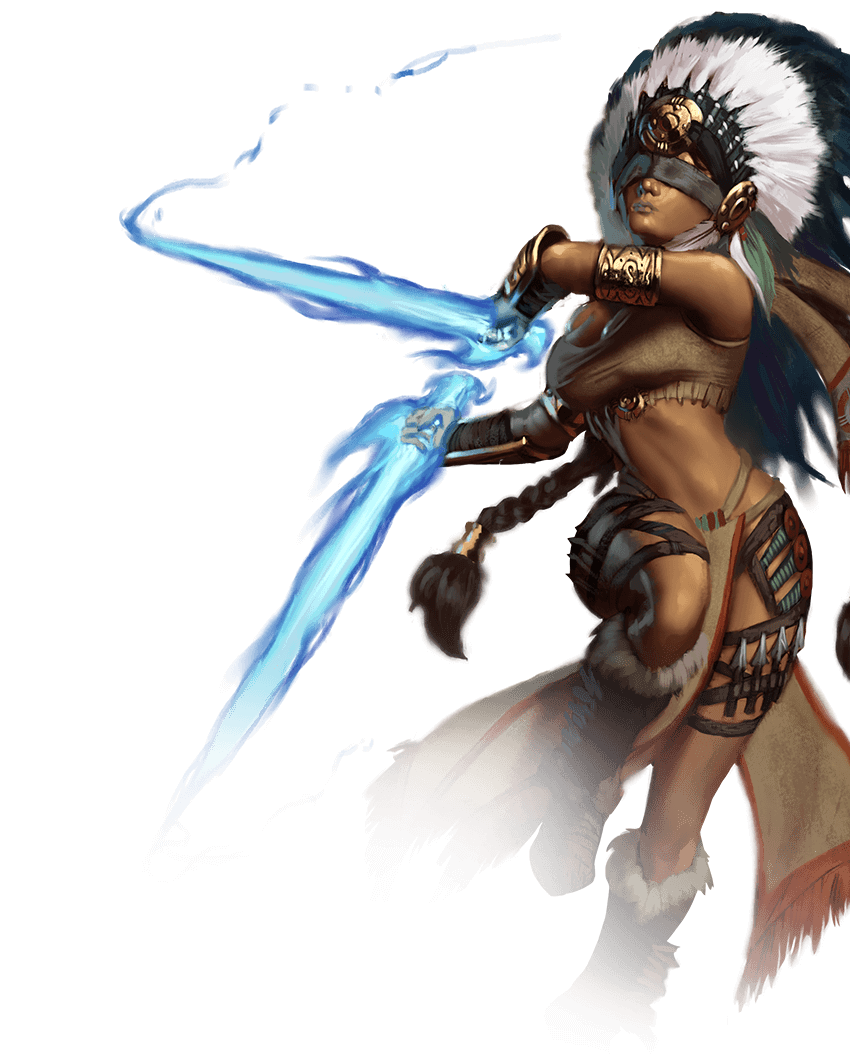 A pan-galactic group that consists of dozens of species all working together to a common cause, the Watchers have been observing humanity for thousands of years. Their standing order is not to involve themselves in the affairs of a sentient species until they reach a level of technological and cultural sophistication. Once this level is reached, the Watchers reveal themselves and the world is honoured by joining the Watcher Hegemony.

On Earth, there is something wrong. Outside influences are interfering with humanity's development. Technologies are available that are decades, if not centuries, beyond their time. The Watchers came to the Earth to free humanity from the various unnatural influences that had taken hold, however recent events have caused their mission to change. One day the Watchers will be able to recontact their people and bring the full might of the Hegemony to this backwater ball of dirt. Until then, the Watchers rebuild their forces in secret, raiding settlements for raw materials and hunting down those who would threaten their own survival on this harsh and unforgiving alien world. 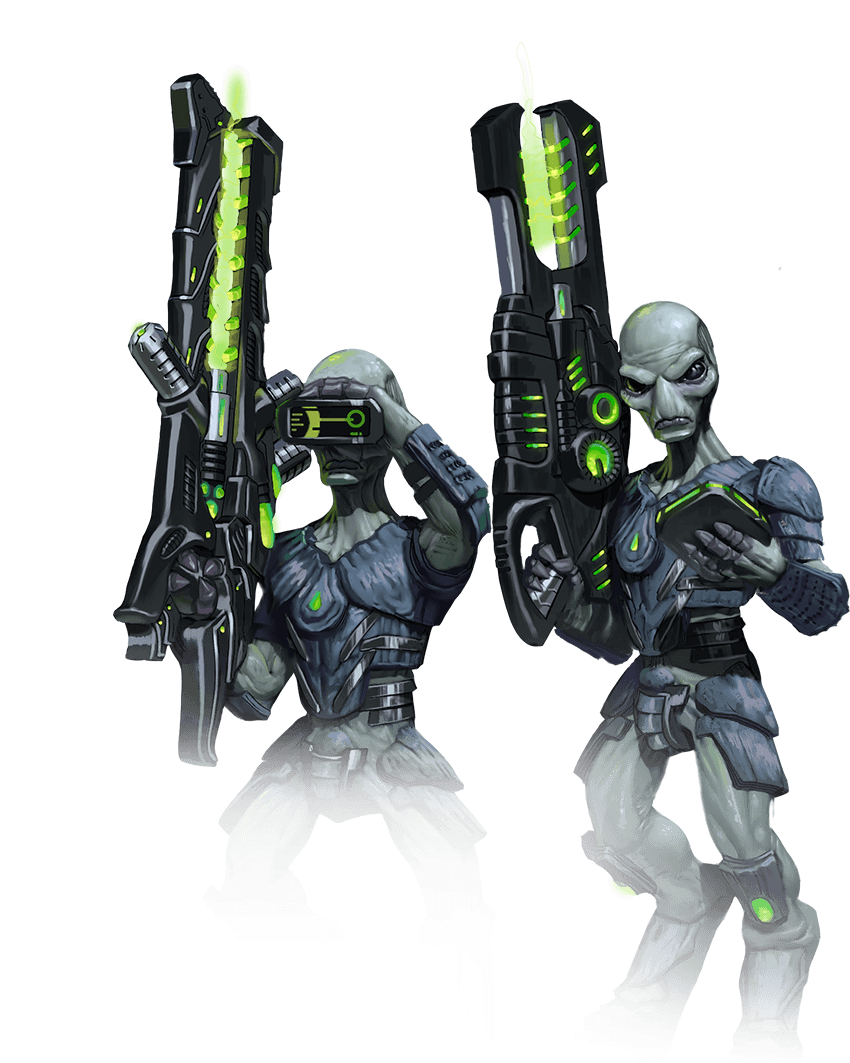